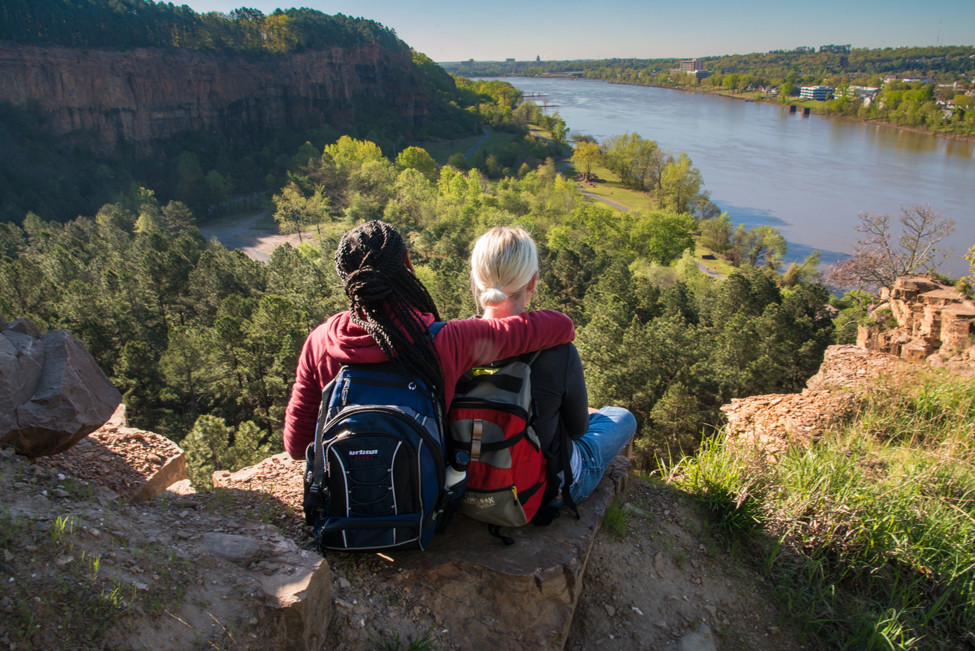 Arkansas Department of Parks & Tourism
Share It Tweet It Pin It
Emerald Park, a 135-acre park in NLR, offers scenic views from atop river bluffs on year-round accessible hiking trails.

Hiking up to the top of Pinnacle Mountain is a rite of passage for any newcomer to central Arkansas. Hikers have the option to choose the “hard” or “easy” side of the mountain, but both routes offer sweeping views of the Arkansas River Valley and the Little Rock skyline. 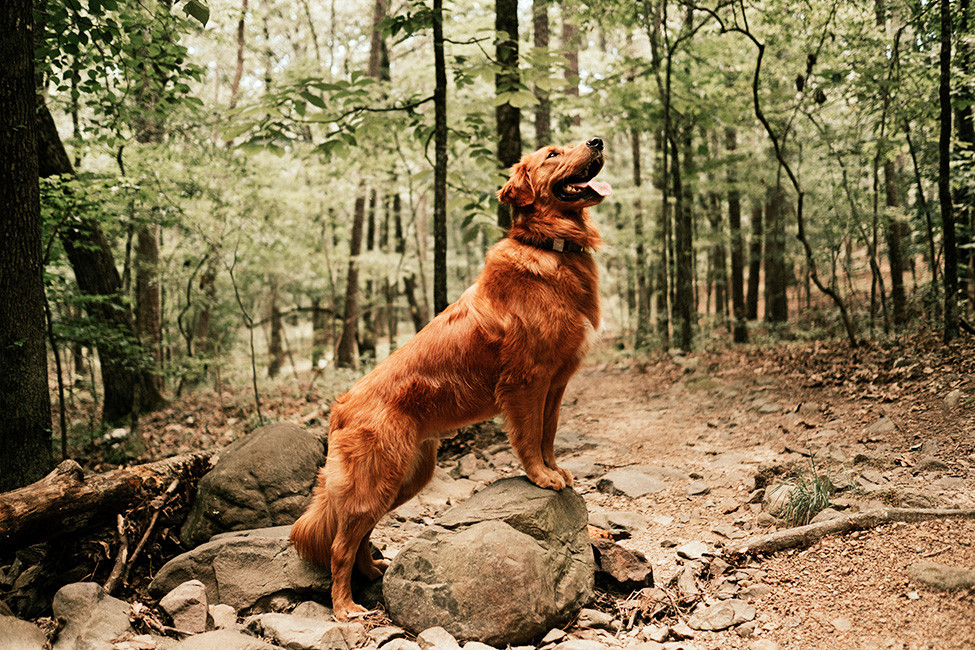 Located along the Arkansas River Trail System, Two Rivers Park is a hotspot for bikers, runners, birdwatchers, fishing enthusiasts and horseback riders alike. The park offers 450 acres of mostly wooded wetlands and 550 acres of open fields, making it the most natural portion of the River Trail. Deer can be spotted grazing year-round. 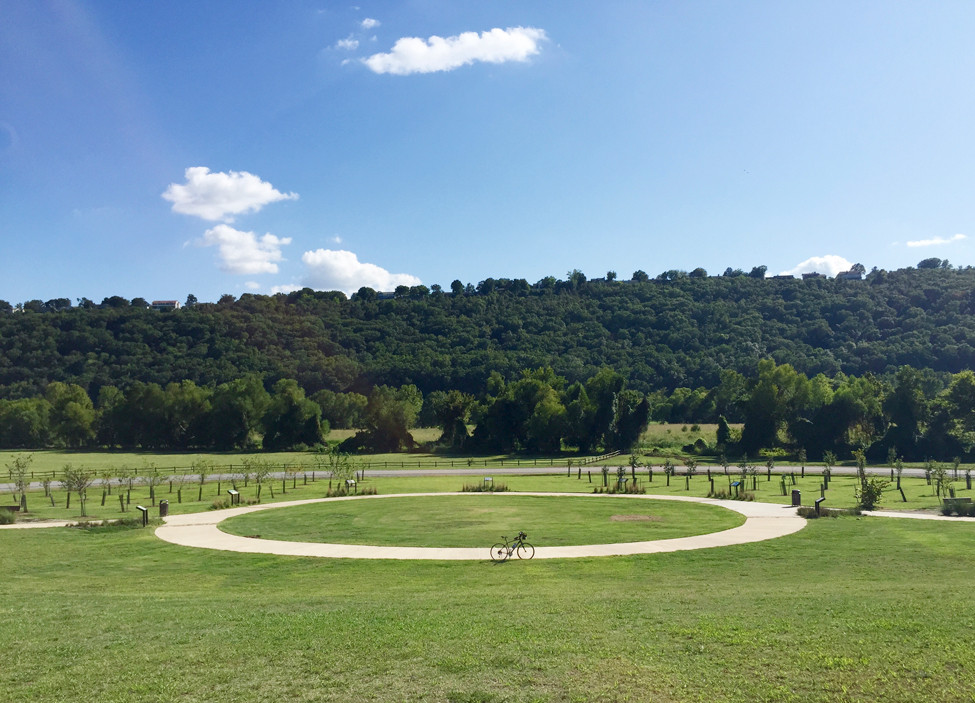 Bridge trivia: Most of the pedestrian bridges along the Arkansas River Trail are re-purposed railway bridges. Little Rock has invested millions of dollars into the bridge system, including The Two Rivers Bridge that was built from scratch costing $5.3 million.

Also located along the Arkansas River Trail System, the Big Dam Bridge is another one of those Little Rock bucket list destinations. Those that make the trek across the bridge will be rewarded with unique views of the river valley, Pinnacle Mountain, Two Rivers Park and Emerald Park. 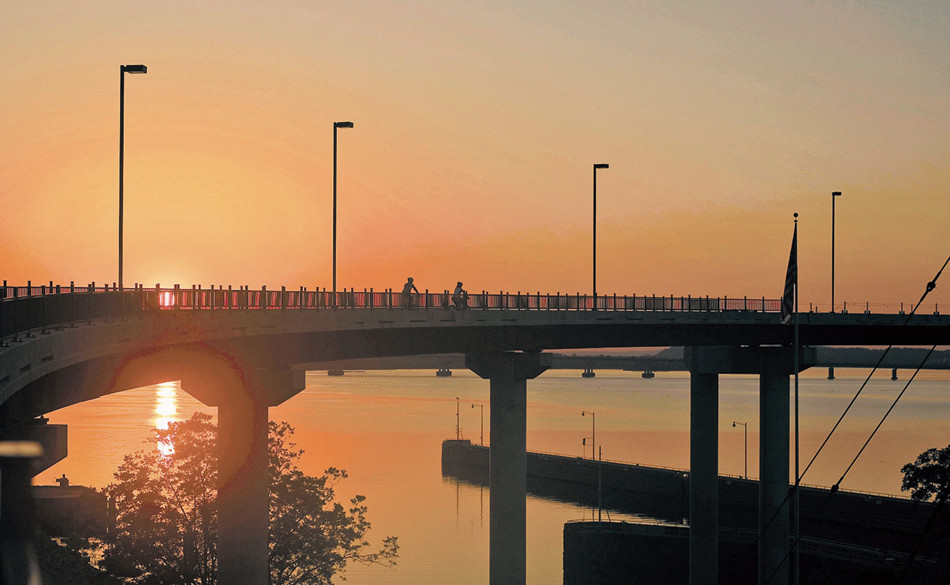 Share It Tweet It Pin It
Riverdale is home to the Big Dam Bridge, the longest pedestrian-only bridge in North America. The locals walk, run and bike across the bridge, which spans the Arkansas River and Murray Lock & Dam, and is a part of the 24-mile Arkansas River Trail System connecting Little Rock and North Little Rock.

Length of the bridge: 4,226 feet
Fun fact: The Big Dam Bridge is the longest pedestrian and bicycle bridge in North America, built specifically for that use.

Allsopp Park is the perfect spot to get lost in nature without leaving the city. The park’s entrance is located off of Cedar Hill Road in the Riverdale neighborhood and stretches west up to Kavanaugh Boulevard, connecting it with The Heights and Hillcrest. The park itself encompasses over 150 acres and has endless recreational opportunities from trail running to basketball. In the fall, the colorful foliage is simply breathtaking. 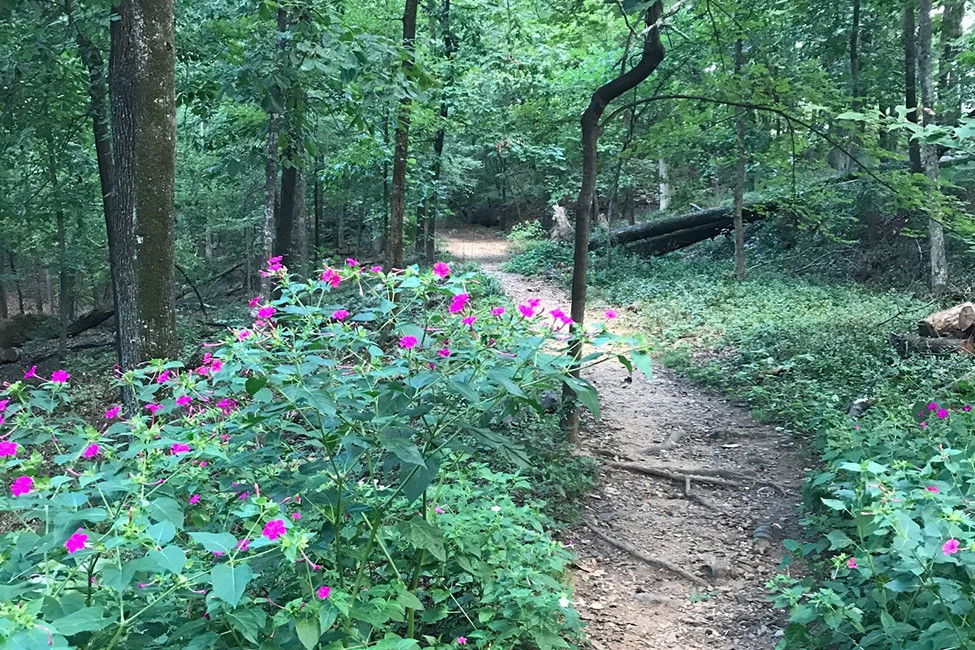 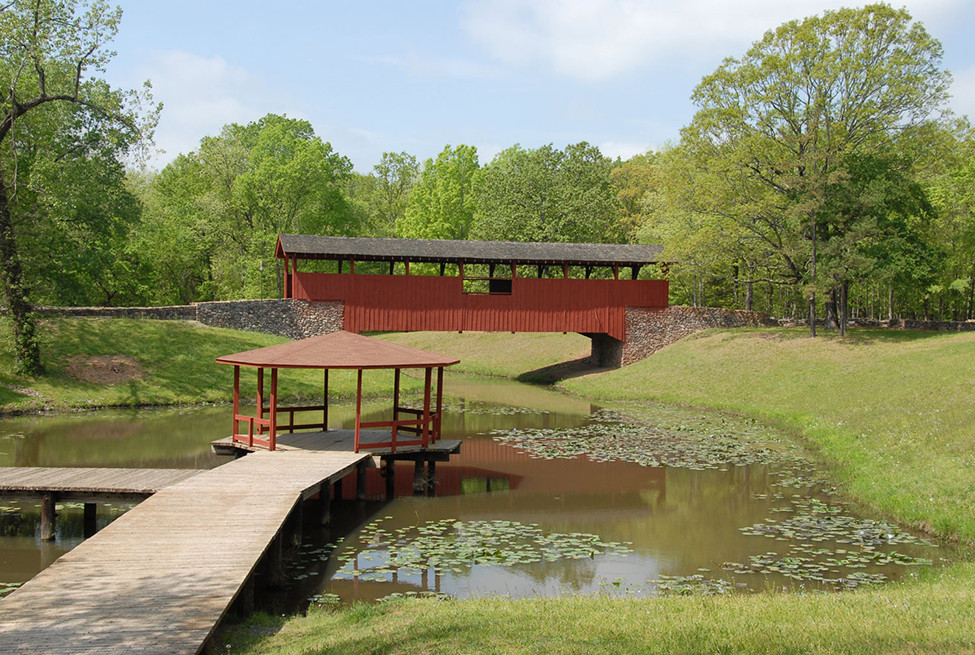 Popular trail: The Burns Park MTB (mountain biking) loop is a 7.3 mile stretch of the park that’s also dog-friendly (as long as your four-legged friend is kept on a leash).
Little-known fact: Burns Park is also home to a pre-Civil War log cabin. 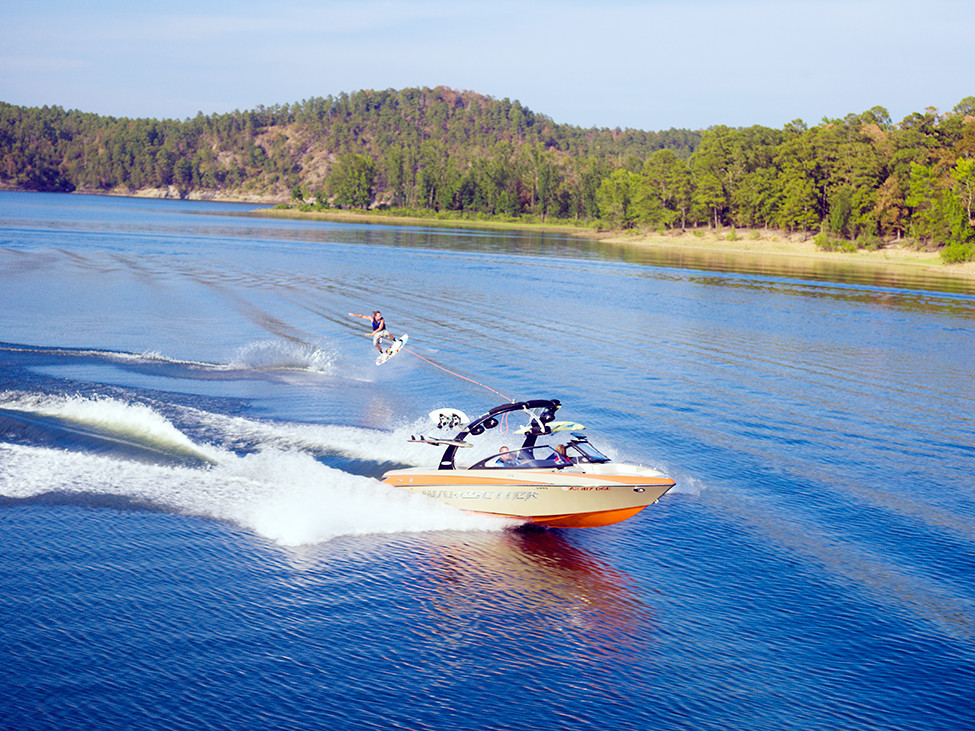 This park in North Little Rock features the Emerald Park Trail, which winds along the bluff line above the Arkansas River. Hikers will be treated to sweeping views of the river valley and the Little Rock skyline.

Sailing
Grande Maumelle Sailing Club is a nonprofit company in the metro that teaches adults and kids how to sail. After mastering this sport, you can compete in a number of sailboat races throughout the year.

Rock Creek Trail
Big fan of cross-country running? This trail is the perfect spot to run a quick 5K while surrounded by nature. The trailhead is located at 200 N. Bowman Road. It's not as highly trafficked as some, so we’d recommend adventuring with a buddy.

Lake Willastein
This 2.1 mile walking trail in Maumelle winds around the picture-perfect lake and park area. Kids especially love the playground and pointing out the ducks that frequent the lake.

T.R. Pugh Memorial Park
This North Little Rock park is home to the iconic Old Mill, which was featured in the opening scene of “Gone With the Wind.” Be sure to bring your camera for the abundant photo ops.

Yoga in the Rock
Yoga in the Rock offers yoga with a view at different outdoor spots around the city. From April to October each year, the group offers free yoga classes perfect for beginners or more practice for serious yogis. For more info, find Yoga in the Rock on Facebook.

Spend Weekends at the Lake

Just 50 minutes southwest of the metro, Hot Springs is home to five lakes — Lake Catherine, DeGray Lake, Lake Greeson, Lake Hamilton and Lake Ouachita. Hot Springs, also known as the Spa City, is the place to be during the dog days of Arkansas’ summers and a favorite among boaters near and far. So is the popular lake town of Heber Springs, which is situated on beautiful Greers Ferry Lake about 90 minutes north of downtown Little Rock. 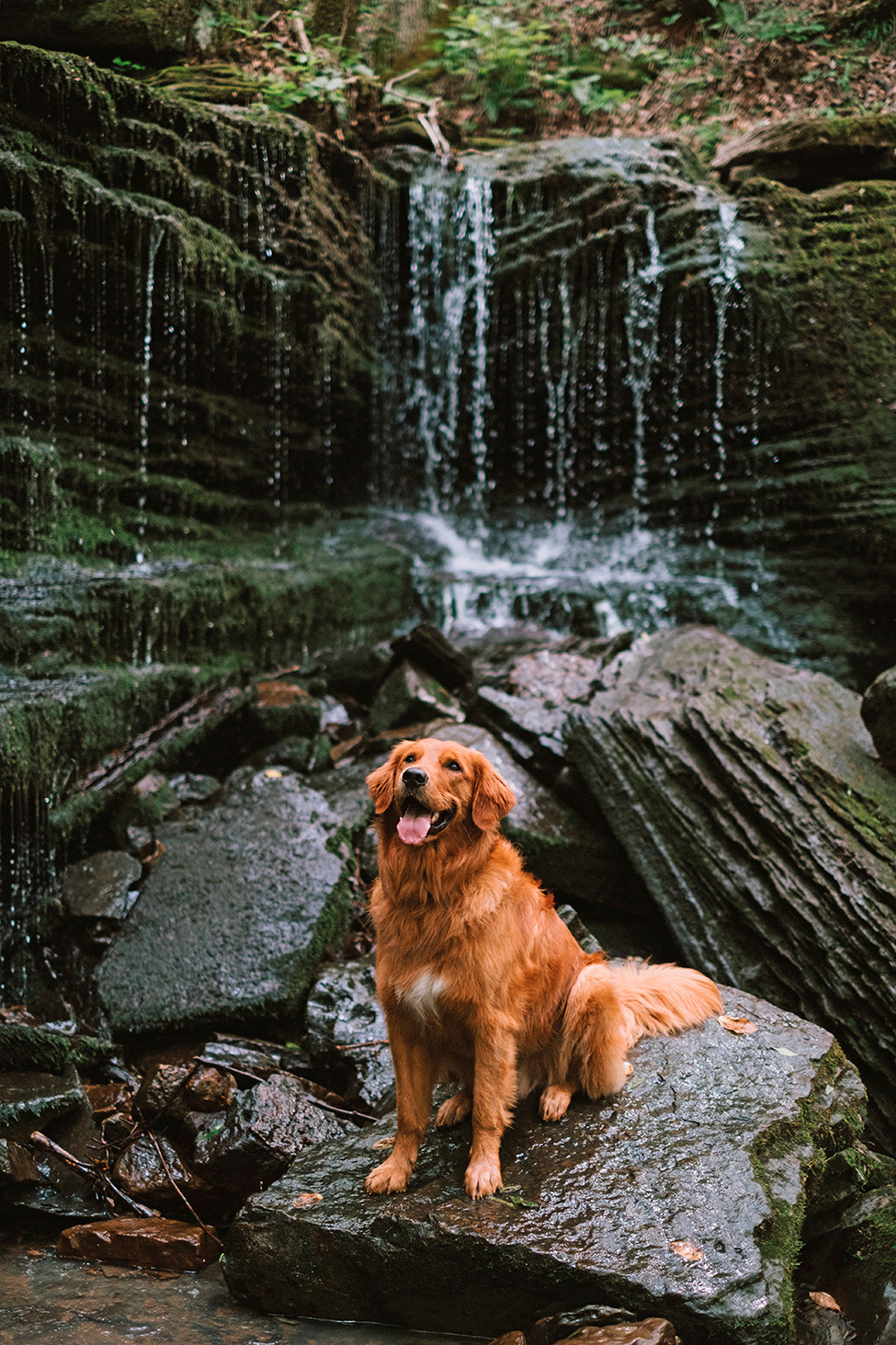 Stephanie Nachtrab
Share It Tweet It Pin It
Bring your camera along on this hike that begins behind the Mather Lodge on Petit Jean State Park. The trail winds down into Cedar Creek Canyon where it leads to Cedar Falls, a beautiful 95-foot waterfall that’s one of the tallest continuously flowing waterfalls in the state.

While central Arkansas may not be known for its waterfalls, northwest Arkansas certainly is. More than 30 waterfalls await hikers willing to put in the time and effort to get to these natural wonders. Some of the highlights include:

Glory Hole Falls outside of Fallsville