As newcomers to Little Rock, the Parkey family finds immeasurable support in the Metro’s warm embrace. 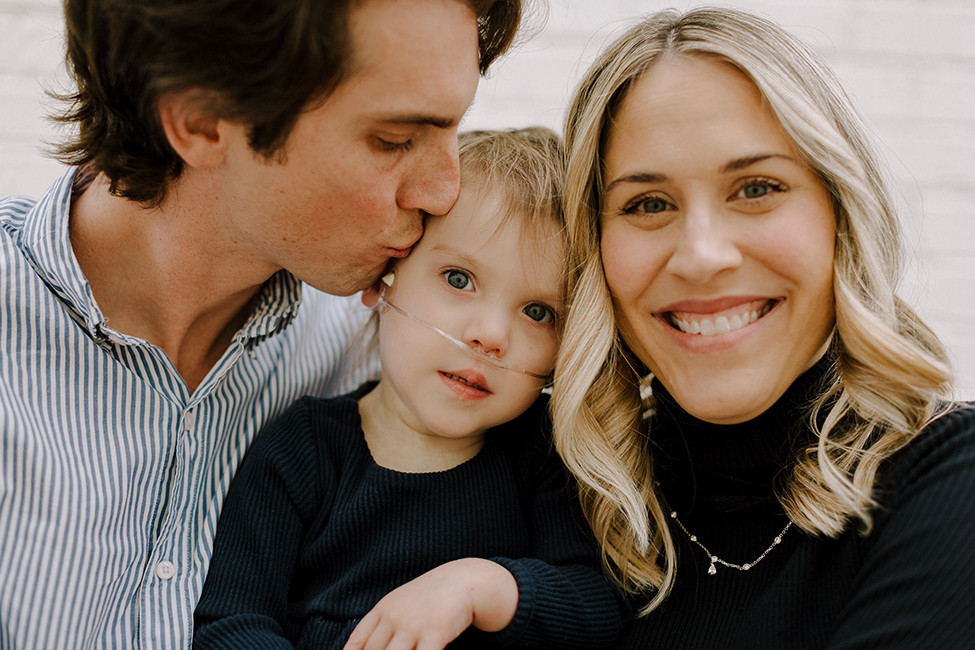 Arshia Khan
Share It Tweet It Pin It
Josh, Billie and Adrienne spent almost the entire first 11 months of Billie's life in the NICU.

Before Adrianne and Josh Parkey could start their new life in Metro Little Rock, the couple had to face down a medical crisis — the fight for their daughter Billie's life.

The couple met in Washington D.C. before moving to Nashville for Adrianne’s residency at Vanderbilt University Medical Center. She completed five years of a pediatric neurology residency and one year of training in epilepsy before she began seeking positions for her fellowship year. She connected with Dr. Greg Sharp, the division chief for neurology at Arkansas Children’s Hospital at that time (he’s now the chief medical officer), who offered her a position in Little Rock. Josh is from Jonesboro and has family in Little Rock, so they were excited to accept the offer. 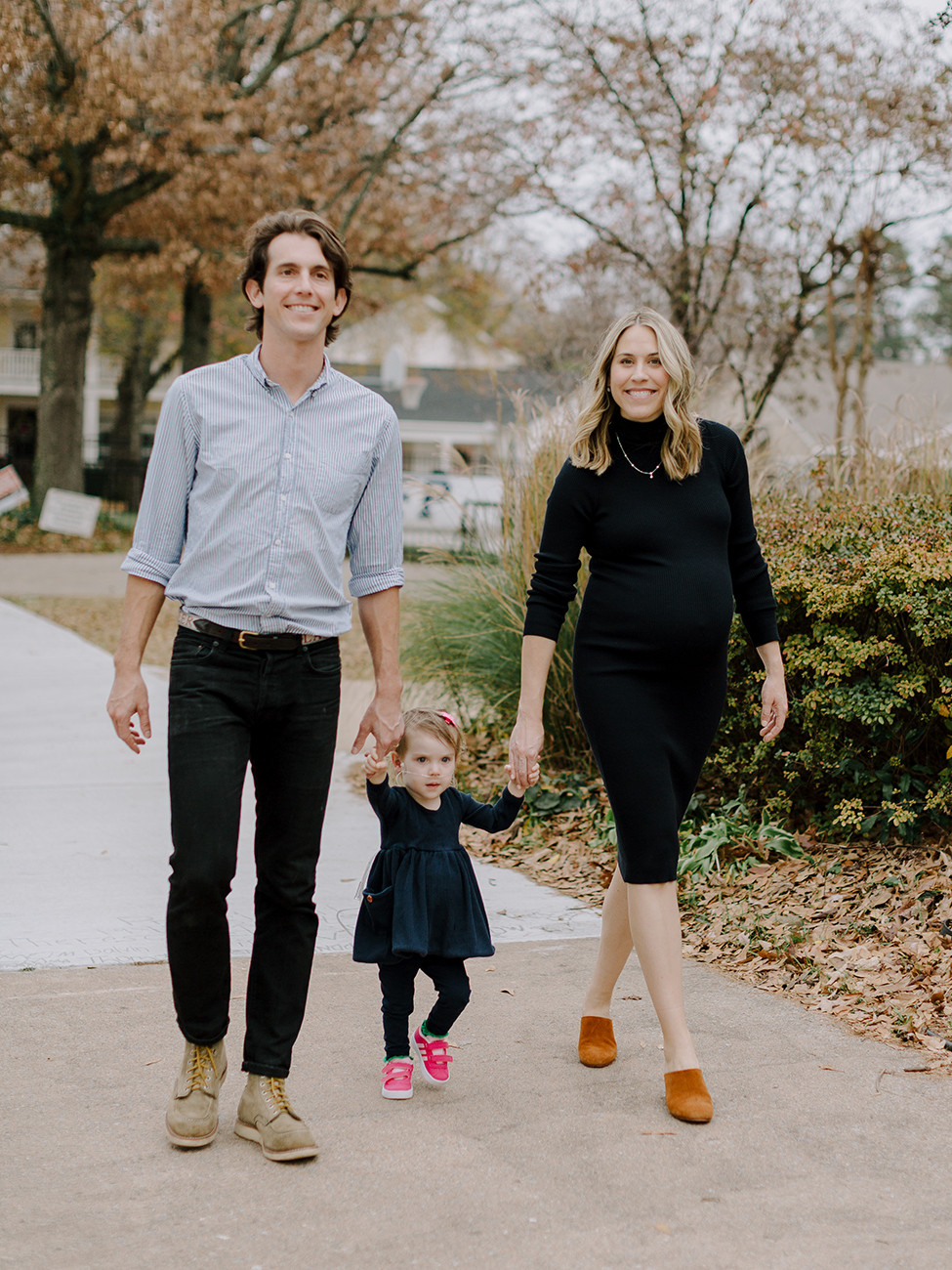 Arshia Khan
Share It Tweet It Pin It
Dr. Adrienne Parkey moved from Nashville, Tennessee to The Heights with her husband, Josh, and daughter, Billie.

As Adrianne and Josh prepared to move, they discovered complications with Adrianne’s pregnancy. At nearly 12 weeks, they learned their daughter Billie would have an omphalocele, a birth defect of the abdominal wall where her organs were growing outside of the belly, covered in a thin, nearly transparent sac. Further ultrasounds only continued to deliver bad news. They learned that Billie would also have Tetralogy of Fallot, a rare condition caused by a combination of four heart defects, which prevents oxygen from pumping throughout the body. Adrianne would have to have major surgery in order for Billie to be removed safely, and even then, it would be a miracle if Billie lived through delivery.

Billie was born Aug. 27, 2019 with a “narrow stalk” omphalocele, which means that there is no way to simply guide the organs back to their proper place. They couldn’t do belly surgery without fixing her heart and they couldn’t fix her heart without fixing her belly. They were basically “stuck in the revolving door of ‘what do we do, how do we fix this, how do we get her out of the hospital,’” Josh said. It seemed an impossible task, even to Billie’s doctors.

When Sharpe found out about Adrianne’s pregnancy difficulties, he held the position at Arkansas Children’s Hospital open for her while she and Billie received care at Vanderbilt.

“He was like a dad figure,” Adrianne said. "When we had all of the difficulty with our pregnancy with Billie, he checked in on me. He was worried about me.”

Billie couldn't leave the NICU until her first major surgery, which wouldn't happen until Feb. 26, 2020. Josh quit his job as a teacher so that he could be there around the clock for Billie. Adrianne worked in the same unit of the hospital and would sometimes have patients in the room directly next to Billie. She said it was hard to switch between being a professional and being a worried mother of a sick child.

“Being a parent in that situation was better medical training for me than five years of residency,” Adrianne said. “Now, I get it in a way that I didn’t before, and when I meet a difficult parent, my heart breaks for them. Instead of getting defensive or frustrated, I understand where they are mentally. I feel more compassion than I ever was able to before because I understand.”

The couple quickly fell into a daunting daily routine. Adrianne and Josh would get to the hospital at 6 a.m. (if they didn’t spend the night). Josh would stay in the room the entire day while Adrianne would go back and forth — juggling patients and pumping for Billie filled much of her day. They would get Billie to sleep and check in with her night nurse before finally heading home between 8 p.m. and 9 p.m. Adrianne and Josh would try to eat, go to bed and wake up to do it all over again.

They had several scares. Billie remained on oxygen and had bowel issues. On February 26, the doctors at Vanderbilt conducted a major, first-of-its-kind surgery to expand the tissue in Billie's belly so that room could be made for her organs, but that was when all hell broke loose. The surgery precipitated a pulmonary hypertension crisis, which forced Billie into emergency open-heart surgery. There were several moments when they worried Billie wouldn't make it.

When the COVID-19 lockdown began, there was a rule that only parents could visit the NICU, but then it turned into a one-parent-only rule. Because Adrianne was working in the hospital, she had free access to all of the hospital, except for her own daughter’s room.

“If you can imagine everything in your life being out of your control, and then COVID happens, and they tell you you can’t see your kid or your wife or anyone; I have never thought that your own life could feel that out of your own hands,” Josh said.

After her first surgery, Billie was so sick all of the time that they were able to get an exception. They weren’t seeing anyone as it was before COVID. People would come to the hospital to visit, but mostly, they were going it alone. With lockdowns, they were truly alone.

By the time Billie was finally discharged on July 20, 2020, she had undergone three belly surgeries and open-heart surgery. Billie went home with a feeding pump and home oxygen, had a precarious open-wound and required meds four times a day, but she was alive, and she was home, and that was all they could ask for. 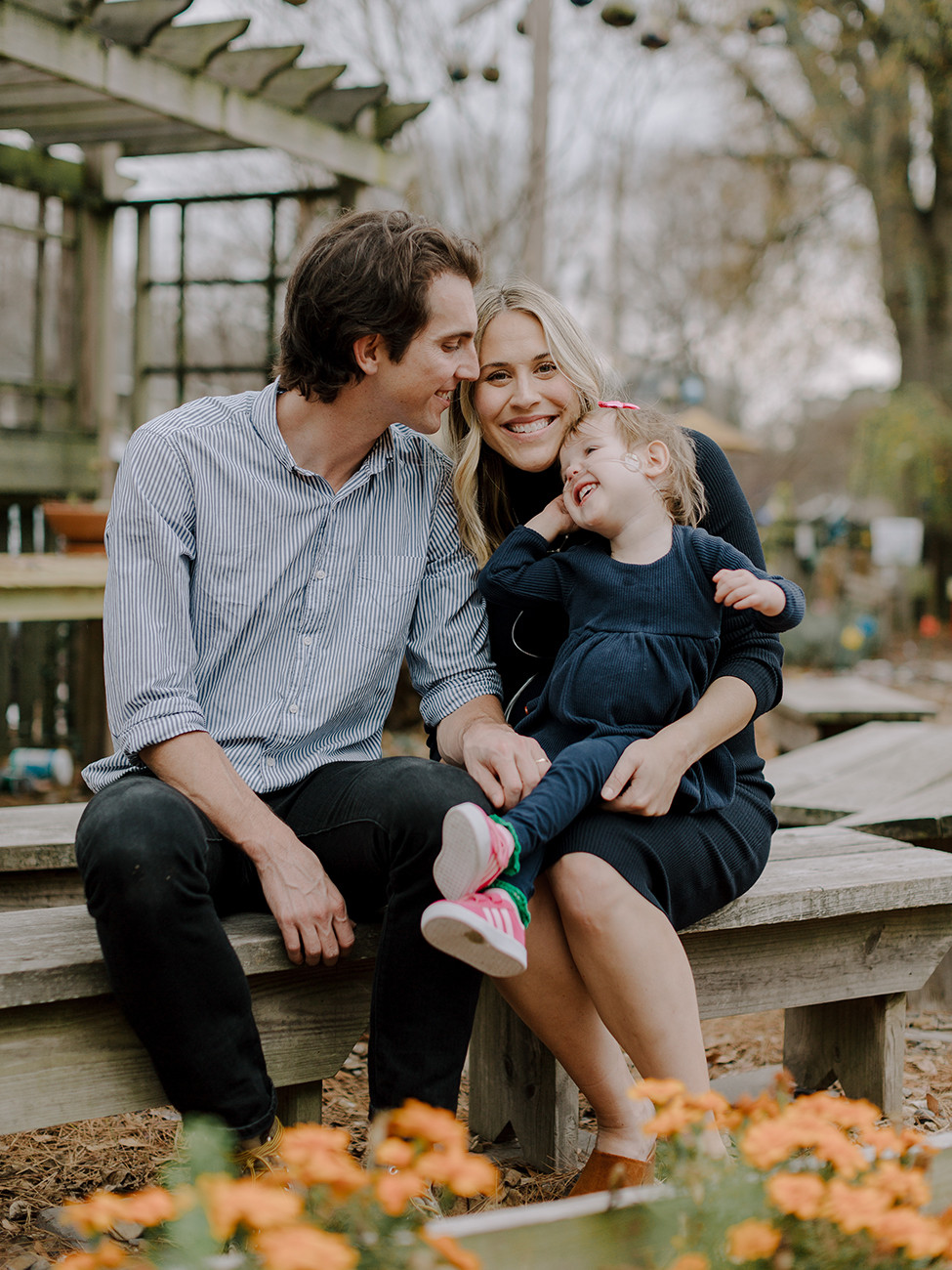 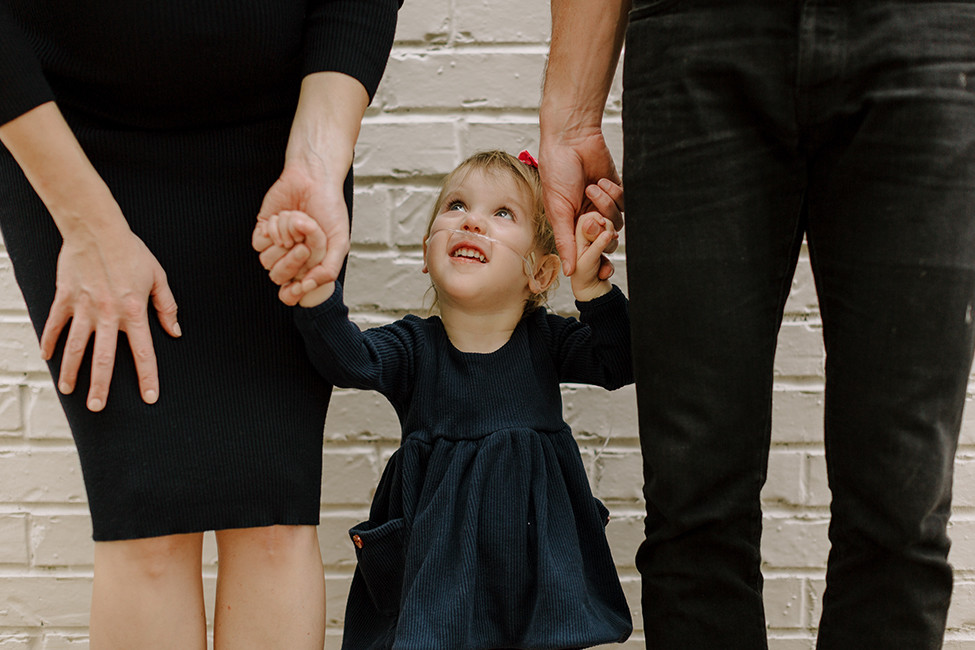 Arshia Khan
Share It Tweet It Pin It
Billie is about to be a big sister! The Parkeys are expecting their second baby, Boyd, in February.

Four months after they left the hospital, Adrianne, Josh and Billie moved to Little Rock. Josh’s brother Jonathan Parkey and his husband Chris Marsh found them a home in The Heights that met all of their needs. Adrianne took a little extra time off before she started her job at Arkansas Children’s in February 2021.

Billie is doing amazing now. The Parkeys found ACCESS, a nonprofit which offers full-time education, therapy, training and activities for children with disabilities. Billie has an oxygen concentrator that stays in the classroom, and her teacher Ms. Lo created an overhead rig so that Billie’s oxygen wire can travel with her in the classroom without getting tangled or pulled. Billie loves going to school and playing with her friends.

"We have really enjoyed living in Little Rock. We’re glad to be here. It’s fun to feel that sense of wanting to help our community and be ourselves. We are so grateful that everyone here has been so welcoming.”
– JOSH

“I didn’t even know ACCESS existed; I would have moved [to Little Rock] just because of ACCESS,” Adrianne said. "Having a place like that after feeling like we can’t leave Billie alone with anyone — to just be able to drop her off at school and know that she is in the best of hands — is more therapy and relief than we could ever dream of.”

The healthier Billie gets, the more the family can build their lives in Little Rock. Josh was able to take a job copywriting marketing content for the Trek Bicycle Corporation, remotely from their home in The Heights. The Parkeys love walking everywhere in their neighborhood, and Billie loves taking in the sights and sounds of the people and the parks nearby from her view in her stroller. After they drop Billie off at school on Thursdays, Adrianne and Josh like to ride their bikes along the river trail and cap it off with breakfast at Boulevard Bread Co.

“I feel like this is a real hidden gem ... such an easy quality of life we really needed after the past two years," she said.

Adrianne and Josh both hope to get more rooted in the community, get involved in different organizations and volunteer. They want to make it part of their ritual every year with Billie to do something volunteer-wise in the hospital around the holidays and give back to this community.

“Every time I opened up on Instagram, people poured out all kinds of love and said 'thank you,'" Josh said. "You never know who you might help by sharing a little pain. It can go a long way.”

The Parkeys are expecting their second child, Boyd, in February 2022. He is expected to be completely healthy and Billie is so excited to meet her little brother. 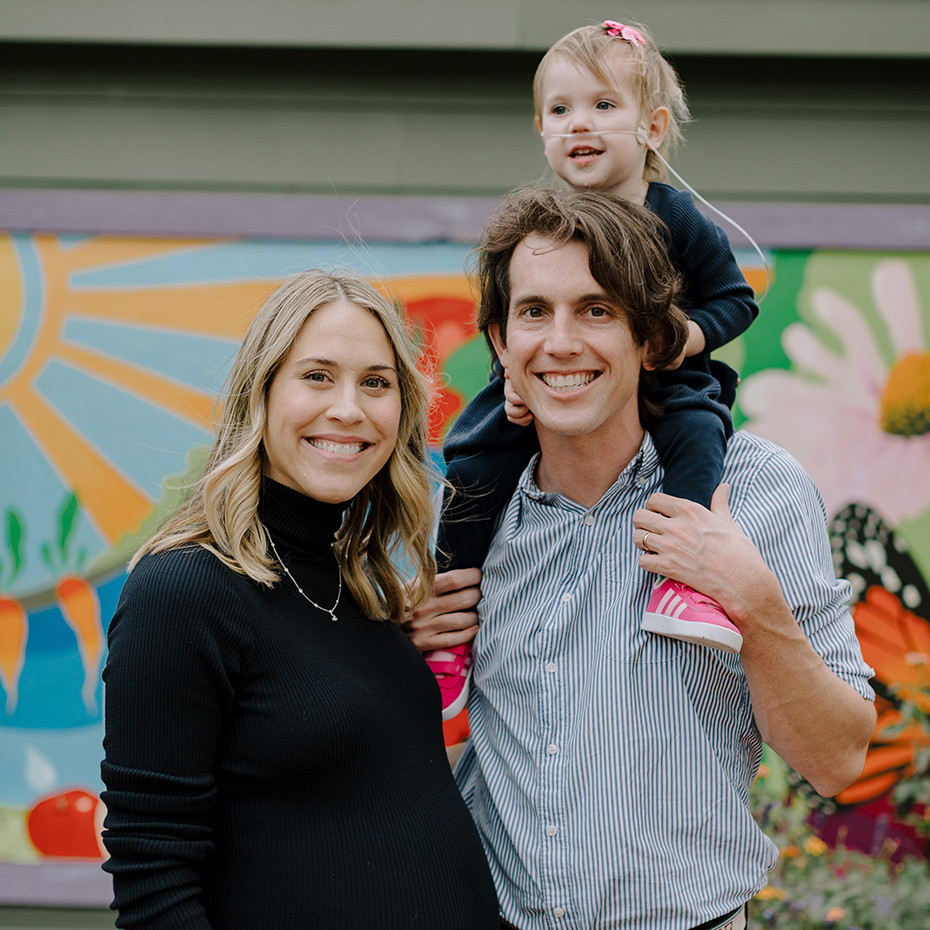 Arshia Khan
Share It Tweet It Pin It
The Parkeys love taking Billie to Forest Park and walking her through The Heights in her stroller.