East Coast native Michael Shaeffer studied illustration at the School of Visual Arts in New York City in the early 2000s. He moved to Little Rock in 2010 to be closer to his mom in Hot Springs, and since the birth of his son, has no plans to leave anytime soon. 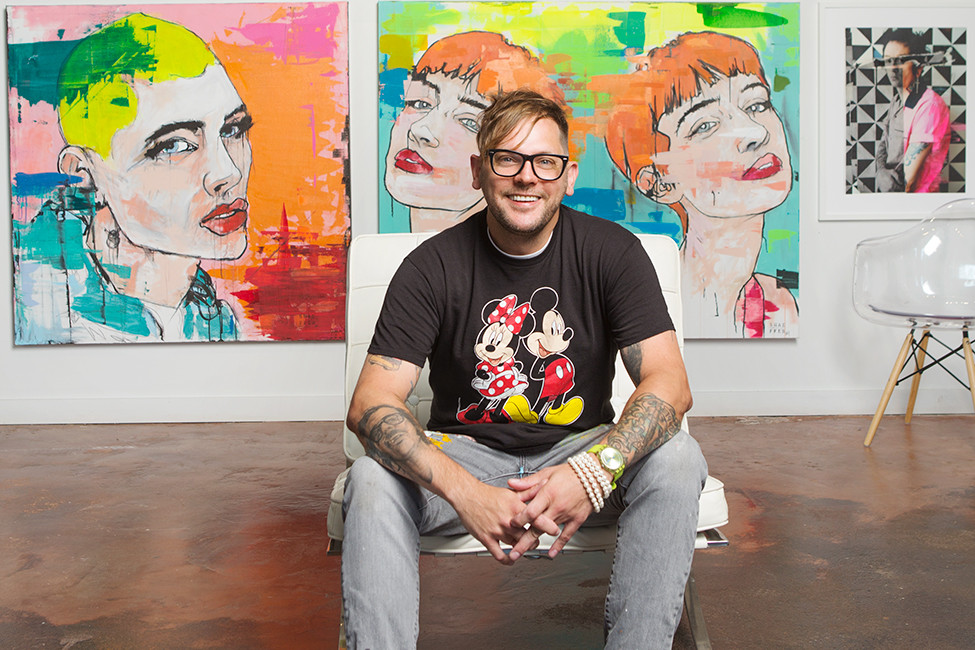 East Coast native Michael Shaeffer studied illustration at the School of Visual Arts in New York City in the early 2000s. He moved to Little Rock in 2010 to be closer to his mom in Hot Springs, and since the birth of his son, has no plans to leave anytime soon.

Creating under the name House of Shaeffer, much of his work is centered around cultural nostalgia that reflects his memories from the New York club scene of the '90s and 2000s. His abstract, large-format portraits, which he refers to as his “Club Kid” series, have been a focus for the past two years. Mirroring the speed of the city, he prefers acrylic paint for the sake of the speed at which it dries, as he often tends to complete a piece in the span of one night. However, during the pandemic, he built his son a studio within his own space so they could create together, which has empowered him to do a lot more creating during the daytime as well.

M2 gallery has represented Shaeffer ever since they moved to the hip SoMa neighborhood two years ago. Shaeffer DJ’d their grand opening, and from there, he knew he wanted to work with them.

“It’s been a fantastic relationship. I can’t say enough great things about them,” Shaeffer says. “They are so amazing because their artists come first. I was very anti-gallery for most of my life, but what’s great about M2 is that they stand up for their artists. They say, ‘Without artists, we’re just a frame shop.’

"There are some really amazing things happening here. I think a lot of that is because Arkansas is a laboratory. It doesn’t have that air of dog-eat-dog, trying to be the next big thing. You can just do what you want to do in a safe place for people who want to explore and expand."
– MICHAEL

They want to make sure artists are happy and taken care of, and have the best representation they can have in central Arkansas. It has been a game-changer for me.”

Little Rock and Arkansas as a whole are expanding their creative scenes, which increases opportunities for artists to make a living off of their art. Shaeffer is curious to see how the art scene evolves across Arkansas in the coming years, amid the rapid explosion.

“As long as there’s a cool core of people who keep it fresh and fun and weird, then I think we’ll see a good thing,” Shaeffer says. “Arkansas is a good place. It’s an interesting little pot because there are all kinds of people, all kinds of work and all kinds of cultures. I am happy to say I am part of the Arkansas arts scene.”